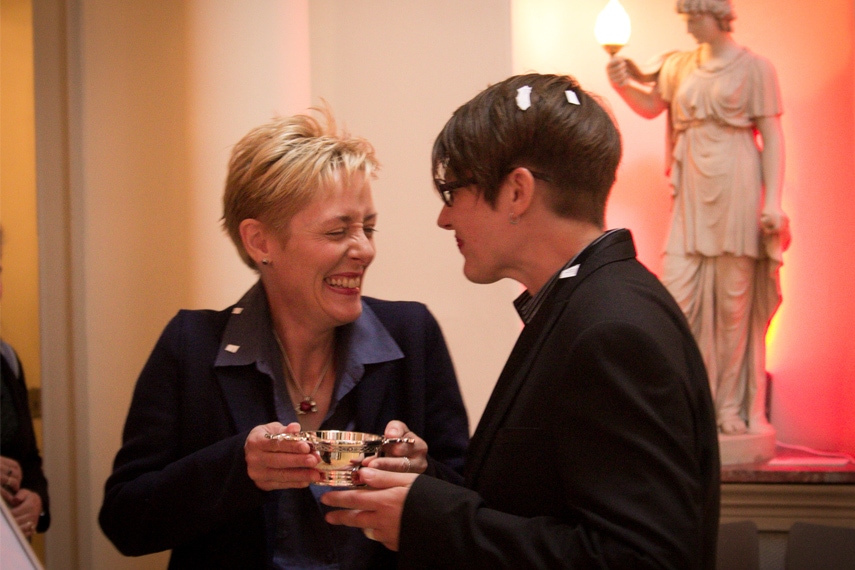 Charlotte Storey popped the question to partner Hayley Bentham at the Assembly Rooms yesterday (Saturday 25 August) during the annual Edinburgh Fringe Festival – where the couple first met 25 years ago.

In true fast-paced Fringe style, the wedding was coordinated for the same afternoon in between performances at the Georgian venue which hosts over 200 festival events throughout August as part of the Assembly Festival programme.

Charlotte chose the last weekend of the 2018 Fringe Festival to celebrate their anniversary – exactly 25 years to the day – with a special commitment ceremony, paying homage to the festival as their modern day matchmaker.

The couple, who met at the Assembly Rooms in 1993, with Charlotte performing in Tony Hawks’ Heartbreak Kid and Hayley waiting behind after the show for an autograph from the all-star cast, said their vows in the venue’s Crush Hall.

Charlotte said: “This was a big surprise for Hayley – but I hope a pleasant one. Assembly Rooms has a special place in our hearts so there was no better place to do it and I’m so pleased we managed to pull this off without Hayley suspecting a thing.”

Assembly Rooms staff helped coordinate the wedding just a few weeks prior to the big day at the George Street venue, which was conducted by celebrant Jackie Grant from Humanist Society Scotland.

Paul McKerrow, front of house manager at Assembly Rooms, said: “The building has such a rich history and heritage, playing host to many special occasions and memorable events since the doors first opened in 1787 but this was something truly special.”

Complete with a cupcake bouquet and rings made from Edinburgh silver, Charlotte and Hayley’s life-long commitment ceremony contributes to what has been yet another successful year at the Assembly Rooms during the Fringe Festival.

For more information about Assembly Rooms, please visit the website.