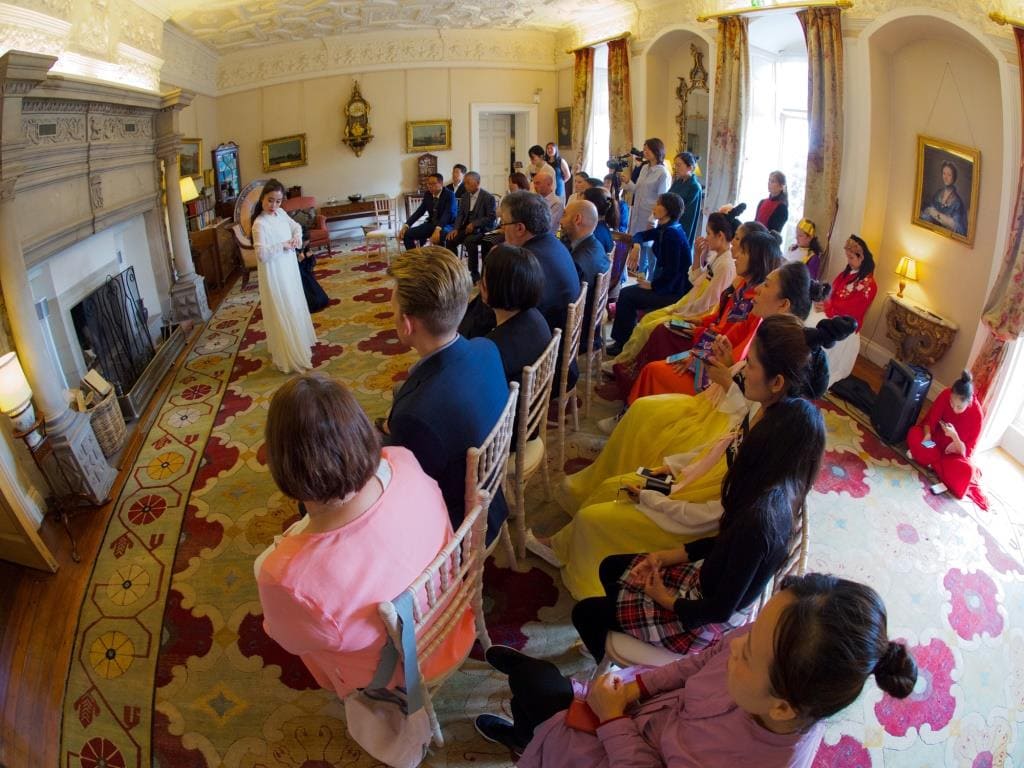 The internationally acclaimed ‘No Name Theatre Group’ chose Winton Castle to host a media conference event ahead of their  their two-week performance at the Edinburgh Festival Fringe earlier this year.

Winton Castle were delighted to be chosen as the host to portray the two ancient cultures of China and Scotland, because of the castle’s rich, 500 year history with its links to Mary Queen of Scots, Bonnie Prince Charlie and the Setons.

Winton Castle is happily welcoming more and more Chinese guests, from the stars and production crew of a hugely popular Chinese TV advert by Freak Films, to corporate and leisure groups. The exclusive use events venue has also recently launched its own Chinese website as a part of Winton’s latest international initiative.

The first part of the event was taken up with interviews and photos of the troupe in their colourful costumes, followed by short performances of modern and traditional interpretive dances and movement. These were enjoyed by Consul Zeng Wei from the Chinese Consulate, Lindsay Neilson from VisitScotland, and Lady Ogilvy whose family still live in Winton Castle. A Memorandum of Understanding between Magna World, the event organiser, and the theatre group, was also signed.

The theme of the performances in the castle’s Scottish Renaissance drawing room was the universally uniting search for personal happiness and fulfilment. Their work reflects the holistic, Confucius philosophy which was beautifully communicated through dance and song.

Mrs Kong, founder and benefactor of the Chinese theatre group, said that “art should not just entertain but inspire, arouse and encourage people to explore life, whether we are in China, Scotland or elsewhere”. She quoted Scottish Rabbie Burns’ poem, ‘A Man’s A Man for A’ That’, saying that she believes passionately different nationalities are united “through similar emotions, hopes and dreams”.

Lady Ogilvy said: “the performances and their colourful costumes were not just beautiful, but magnificent, and represented several Chinese dynasties. When I asked what advice the troupe director would give to UK students receiving exam results (which happened to be that day!), I was treated to an improvised, acted, and very elegant answer involving two girls responding to prompts.”

You can see a full feature on the launch event in the ‘Scotland Correspondent’ magazine by Paul Kelbie, ‘Actions Speak Louder than Words’, in English (page 20) or in Chinese (page 50). The photographs have generously been provided by Stewart Cunningham at Great Scot Photography.

Searching for your unique event venue? Did you know you can search and filter venues using our quick search tool and get in touch with multiple venues at once using the enquiry form?